July 2019: Archbishop Elpidophoros with US Political leaders during the US State Department’s Second Ministerial to Advance Religious Freedom 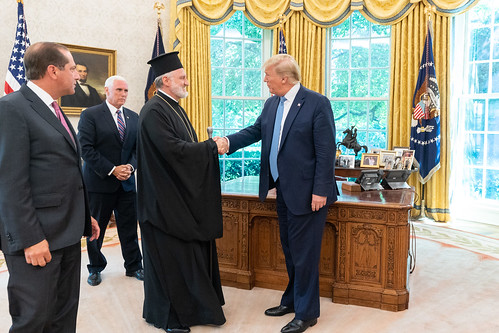 Archbishop Elpidophoros meets with President Donald J. Trump
Archbishop Elpidophoros met President Donald J. Trump in the Oval Office of the White House in Washington on Tuesday, July 16, 2019 to discuss the pressing issues of the persecution of Christians and religious freedom for the Ecumenical Patriarchate. Also present at the meeting were Vice President Mike Pence; Secretary of Health and Human Services Alex Azar; and Vicar General of the Greek Orthodox Archdiocese of America Fr. Alex Karloutsos.

This photograph is provided by THE WHITE HOUSE as a courtesy and may be printed by the subject(s) in the photograph for personal use only. The photograph may not be manipulated in any way and may not otherwise be reproduced, disseminated or broadcast, without the written permission of the White House Photo Office. This photograph may not be used in any commercial or political materials, advertisements, emails, products, promotions that in any way suggests approval or endorsement of the President, the First Family, or the White House.